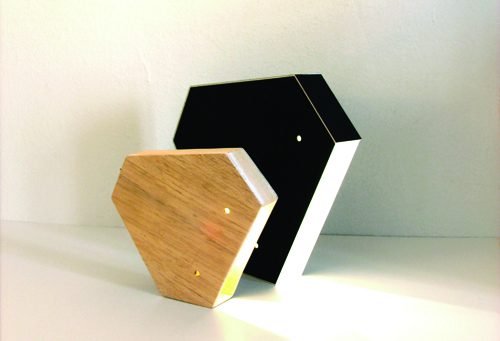 Allot Basic is a series of lamps. Their design principal came from existing lampshades and their potential contours. The whole process was based on two main constraints*. They are slices of light that can be integrated anywhere. Due to their trapezoid shapes, they have no obvious point of balance (or have more than one) thus are able to change their position. As a result, shifting functions according to mood becomes a tactile activity.

*Constraint  #1: The past few years I have been interested in the outline of existing objects and their potential figures. Architecturally, the 2D drawing constitutes the most simple and self-explanatory form of describing space. The missing third dimension is a fleeting idea, it is what will eventually give shape and aesthetic to a space. It is behind this third dimension that you always find the hidden curves and the unintended textures. I decided to ‘discard’ this third dimension. The outline of an object is the final object.

Constraint  #2:  I always felt that all the energy that is spent on producing a lamp, is belittled by the simplistic division of suspended/ floor or table lamp. I wanted to make a lamp that serves all the above. A lamp that can be used in versatile ways and be integrated anywhere.