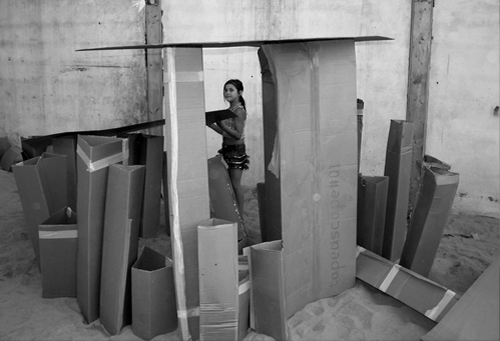 Ø16 WORKSHOP is a group of young architects and designers, whο work on the design and prototyping of objects and installations. The group participated in ReMap KM2 with the project Tapedscape #01, a guerrilla playground made of ephemeral and temporary structures which aimed to form an urban play area for children. The area of Kerameikos – Metaxourgeio near the center of city of Athens, was a fertile ground for the development of this project. KM includes several controversies in its territory as being an area that is under the reconfiguration of its urban and social identity. The proposition of the creation of the urban ephemeral constructions revealed group’s intention to research and investigate for alternative and participatory ways and processes for playgrounds for the children of the area of KM which lacked of similar public infrastructures. An empty plot of land in the area of Kerameikos – Metaxourgeio was the first space to host the playground. The ground was covered with sea sand on which prefabricated, triangular cross-section elements out of recycled cardboard were positioned. The installation improvised labyrinthian ways and playful alternative landscapes. Children from the nearby school but also from the wider region had the opportunity to interact and play with its flexible structure by transforming and shifting it freely until it was not possible to be used anymore.