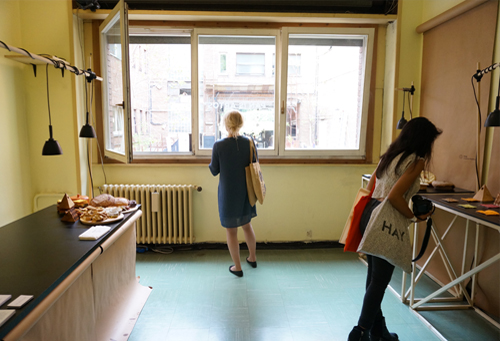 PAN IS ARTOS* is a play of words combining latin, greek and ancient greek words.

pānis • in Latin means bread, loaf or figuratively food or nourishment, whether physical or spiritual.

ἄρτος • (ártos) in ancient Greek is the word for bread or figuratively food or nourishment in general.

PAN IS ARTOS* is a pop-up design bakery concept conceived and performed in collaboration with designer Anna Fabrizi, design duo STUDIOLAV and baker Simone Conti.
The whole premise is based on a new collection of utensils that help with the production of bread and its derivatives. A series of moulds that give a twist to the culinary preparations, evoking further uses and values to the ritual of bread making.
The pop up bakery concept was launched during Milan Design week 2015 as part of the Designjunction exhibition in an old Milanese school. Live presentations of the utensils took place concurrently to bread making, aiming to present potential ways of baking, making it relevant to current lifestyles and interacting with new audiences.